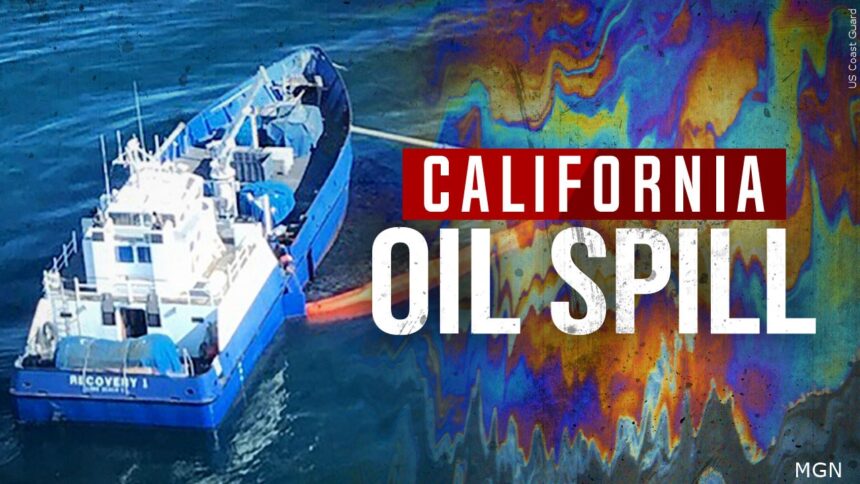 The Coast Guard received the first report of a possible oil spill off the Southern California coast more than 12 hours before a company reported a major leak in its pipeline and a cleanup effort was launched, records show.

Oil spill reports reviewed Monday by The Associated Press raise questions about the Coast Guard’s response to one of the state’s largest recent spills and about how quickly Amplify Energy, the company operating three offshore platforms and the pipeline, recognized it had a problem and notified authorities.

Two early calls about the spill came into the National Response Center, which is staffed by the Coast Guard and notifies other agencies of disasters for quick response. The first was from an anchored ship that noticed a sheen on the water. The second came six hours later from a federal agency that said a possible oil slick was spotted on satellite imagery, according to reports by the California Office of Emergency Services.

The spill sent up to 126,000 gallons (572,807 liters) of heavy crude into the ocean off Huntington Beach, and it then washed onto miles of beaches and a protected marshland. The beaches could remain closed for weeks or longer, a major hit to the local economy. Coastal fisheries in the area are closed to commercial and recreational fishing.

Federal and state authorities require rapid reporting of a spill. Failure to do so has led to criminal prosecutions of companies, including Plains All American Pipeline, which caused a coastal spill near Santa Barbara in 2015, and Southern California Gas Co. for a massive well blowout later that year.

Meanwhile, Coast Guard officials said Monday that investigators were looking into whether a ship’s anchor may have struck a pipeline on the ocean floor.