Obama to campaign for McAuliffe in tight race for Virginia governor 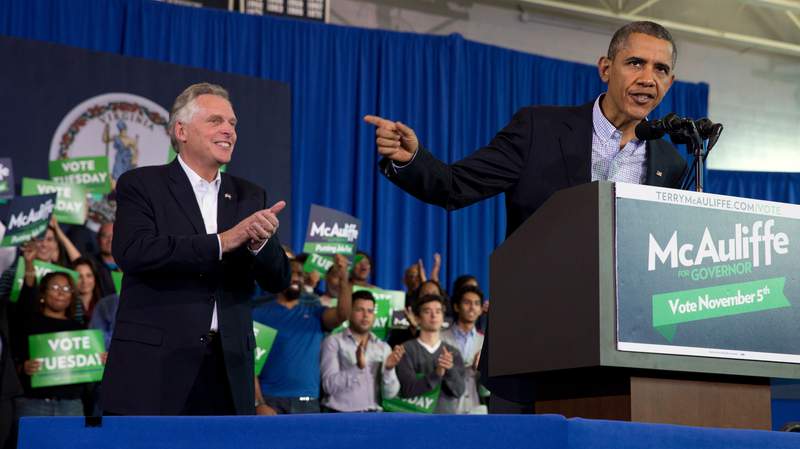 Former President Barack Obama will join a rally for Terry McAuliffe next week, another sign of the urgency national Democrats feel in Virginia’s gubernatorial race. McAuliffe announced Obama’s visit — scheduled for Saturday, Oct. 23, in Richmond — during an appearance Tuesday on MSNBC’s “Morning Joe.” “There’s going to be a lot of excitement,” McAuliffe said. “The stakes are so huge. People don’t understand. They come out in presidential years, but they have to come out in this off-year.”

Virginia holds its election for governor every four years in the year after a presidential election, making the contest both a referendum on the party in the White House and a bellwether for the following year’s midterm races. McAuliffe served as governor from 2014 to 2018, but state law prohibits consecutive terms.

The race is shaping up to be highly competitive. A poll last week from Christopher Newport University placed McAuliffe at 49 percent and Republican Glenn Youngkin at 44 percent, within the 4.2 point margin of error. The same poll in late August found McAuliffe with a 9-point lead.

Obama’s will be the latest in a string of high-profile Democratic assists for McAuliffe. First lady Jill Biden will campaign with McAuliffe on Friday in Henrico County. And Stacey Abrams, a former state legislator in Georgia who became a national figure after losing a close race for governor in 2018, is expected to appear with McAuliffe on Sunday in Norfolk.