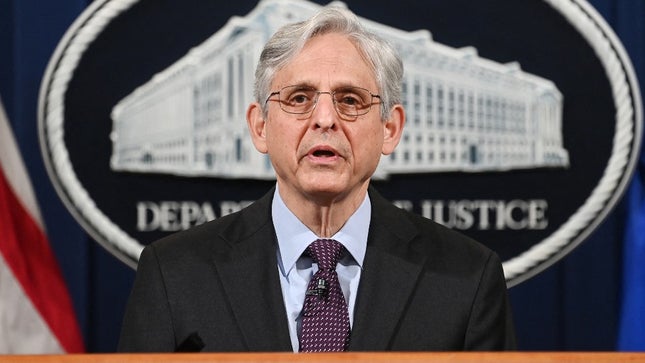 The Justice Department is suing Texas over the state’s new controversial restrictions on abortions after six weeks of pregnancy, Attorney General Merrick Garland announced  Thursday. Garland said the law is plainly improper both for its onerous restrictions on abortion access and for the provisions allowing state residents to sue anyone who aids or carries out restricted abortions.

“The act is clearly unconstitutional under longstanding Supreme Court precedent,” Garland said at a press conference. “This kind of scheme to nullify the Constitution of the United States is one that all Americans, whatever their politics or party, should fear,” Garland said.

“If it prevails, it may become a model for action in other areas by other states and with respect to other constitutional rights and judicial precedents. nor need one think long or hard to realize the damage that would be done to our society if states were allowed to implement laws that empower any private individual to infringe on another’s constitutionally protected rights in this way,” he added.

The move comes a week after the Supreme Court refused to block the state law, which would effectively ban most abortions, in a 5-4 ruling over the objections of the court’s liberal wing and the Chief Justice John Roberts.

The lawsuit was filed Thursday afternoon in federal district court in Texas.