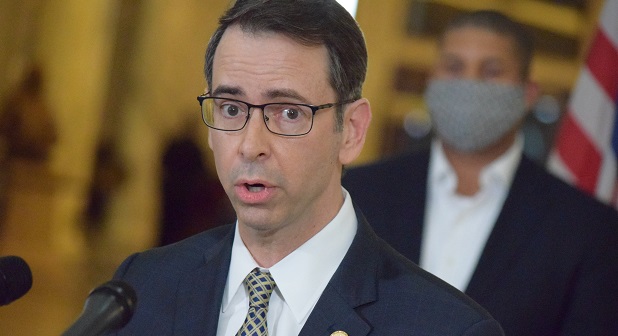 Roy C. McGrath, 52, of Naples, Florida, is accused of fraudulently obtaining funds from the Maryland Environmental Services corporation and illegally recording private conversations with senior state officials without their consent.

“It is an honor and privilege to serve one’s community, and public officials are entrusted to place the interests of citizens above their own,” acting U.S. Attorney Jonathan F. Lenzner said in a statement. “Our federal and state law enforcement team in Maryland will always hold accountable public officials who betray the public trust for their personal gain. Maryland residents should always demand honesty and integrity from those in government, and hopefully this indictment offers the public some level of confidence that we are committed to prosecuting those who violate that trust.”

“Our office will seek to hold accountable any public official who abuses the privileges of their office for corrupt reasons or illicit personal gain. The Office of the State Prosecutor will continue to work collaboratively with our partners to ensure the public’s interests are protected,” Maryland State Prosecutor Charlton Howard said in a statement.

“According to this indictment, Roy McGrath misappropriated public money for his own benefit. From personal travel to even obtaining a certificate from one of the most prestigious universities in the nation, McGrath’s alleged actions were self-serving and ultimately self-sabotaging,” Thomas J. Sobocinski, Special Agent in Charge of the FBI Baltimore Field Office, said in a statement. “The FBI and our law enforcement partners are committed to rooting out public corruption and holding officials like him accountable.”

According to the six-count federal indictment filed Tuesday in U.S. District Court and the 27-count criminal information filed in the Circuit Court for Anne Arundel County, on Dec. 27, 2016, McGrath was appointed by the governor to serve as executive director of MES.

MES functioned as an independent state corporation that did not pay its employees according to the state government pay scale, but did require its employees to comply with state travel regulations, annual leave policies, and policies regarding compensatory leave, and time and attendance reporting.

The federal and state charges allege that from March 2019 through December 2020, McGrath personally enriched himself by using his positions of trust as the executive director of MES and the governor’s chief of staff to cause MES to make payments to McGrath, or on his behalf, to which he was not entitled, prosecutors said.